It is a bit of a misnomer to call a GORUCK a “race” because a GORUCK really is a team challenge event. Generally, a race report from a GORUCK is called an AAR – after action report (GORUCK has strong military connections and a lot of their lingo and events are influenced by that). That being said, here is my AAR/race report from the GORUCK Light in Philly on March 4, 2017.

For a runner, a GORUCK event is a kind of unique challenge. Instead of going out to a race where everyone competes more or less individually, we go out as a team and work together to achieve and complete what is thrown at us. Most running races I’ve done, I know exactly what I’m in for: distance, route, etc. At a GORUCK, you never really fully know what will be thrown at you. GORUCK events are led by a cadre, a guy with a military background, often Army Ranger. The GORUCK site says, “They are all decorated combat Veterans of Special Operations who have served America, and Americans, honorably across the globe. Through GORUCK, their service continues at home, as they are tasked to teach people how to overcome adversity as individuals and as teammates.” During a GORUCK, you wear a ruck (backpack with weight in it) through the whole event. You carry your water and any other gear you need. The event consists of a series of movements (walking as a team from one location to another) and challenges, typically consisting of some form of PT (pushups, squats, burpees, mountain climbers, etc.). Your ruck is on through all of it, so if you hate burpees, think about how much you’d hate burpees with a ruck on.

Our Light event in Philadelphia started at Penn Treaty Park at 2pm, and it was cold. Really, really cold. And windy. It started out at 34F with winds near 20mph and the temps dropped as it got dark. As we gathered up, some of us eyeballed the river and wondered if we’d have to do water challenges. Most GORUCK events include some water challenges, but I’ve heard that they don’t make you get wet when it’s under 50. I personally was worried about the Delaware River because that stretch of the river can have very strong currents despite looking rather calm. People drown in the part of the Delaware near Philadelphia pretty regularly, so I was fully prepared to refuse to go in the river if it came to that, and I wasn’t sure how that refusal would be received. (Fortunately, it did not.) Cadre Michael arrived and got us lined up in a formation and started doing ruck checks to ensure everyone had the requisite weight and other gear. Cadre asked if there were people we were expecting who were not in the line-up, and I mentioned my acquaintance Jared, who I didn’t see yet.

We launched in to the “welcome party.” A GORUCK welcome party isn’t particularly welcoming, nor is it much of a party. Our welcome party consisted of a modified version of a MARSOC Short Card (jumping jacks, body builders, pushups, squats, and then some). We had to do each move as a team, so our team leads got out front and started counting us through each round. Somewhere in the middle, my buddy Jared arrived (remember Jared?). His penalty for being late was to run circles around us while holding our team weight (a sledgehammer) over his head. I was honestly a bit glad to get working during the welcome party as it distracted me from my completely frozen fingers and warmed me a little bit.

Next, cadre started leading us down towards the water. I began to get nervous, but he just had us pick up a big log which we schlepped through the city. We quickly organized ourselves into a tall group and a short group and traded off with the log. I was part of the short team. The log carry works best when everyone is near the same height. Our team started to look very coordinated as we switched teams on the log, or a team switched shoulders. We walked a while like that until cadre decided to stop us and make us do some walking lunges. With the log. Blessedly for me, the tall crew was on the log at that point, and they really made it look easy, but I would not have wanted to be on that. We marched on to another small park where cadre had us take our rucks off, which is pretty unusual for a GORUCK event. 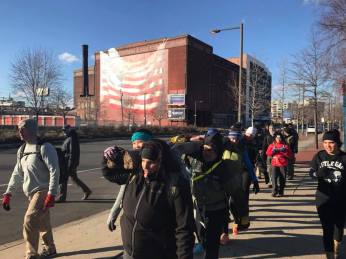 After dropping rucks, he had us lay down on the ground, all lined up alternating with our heads side by side. Our next challenge was team crowd surfing. We each took a turn “surfing” down the line with our teammates passing us down the line. For me, surfing was harder/scarier than passing other people down the row, but everyone had to have a go.

We rucked back up and started marching again, this time to another small park. Cadre had us pick new team leads, and we started what he told us would be a timed event. We did mountain climbers, hopped up and dashed to the end of the field, dropped for mountain climbers again, and dashed back. On the first go, our team time was 1:20. What cadre did NOT tell us was that we would have to beat the time set on the first go. We went through a few more attempts, failing to beat that first time.

Somewhere in that mix, a friend wanted to medical drop because of an ankle issue. I struggled a bit with whether to intervene and try to convince her to stay or trust her judgment about her physical condition and let her go. I stood silent for a moment, and thought back to this AAR. In his event, someone wanted to drop and he didn’t really try to stop him. On reflection, he said, “I failed that guy. I should have gotten him to stay. That’s on me.” I said to my friend, “Are you really sure? We can help you.” From there, the cadre jumped in, and other people jumped in, and she ended up finishing the event out. I hope we did right to get her to stay. During a GORUCK, you really act as a team, so if someone is struggling, you can help out by taking their ruck for a bit, or finding other ways to help them out. It is important to be a good teammate by offering help, but it is also important to be willing to ask for and accept help when you need it. After four rounds, we finally beat our first time on the mountain climbers and sprint, and we moved on. 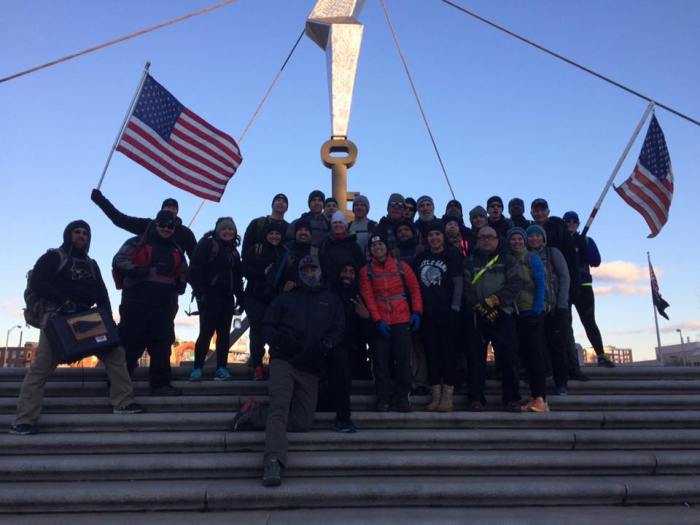 I’m in the back right with the flag. Cadre is the guy in front on one knee.

We rucked around to Independence Mall, but en route, committed a cardinal sin of GORUCK. During a GORUCK, your team must always cross traffic lights during the “walk” sign, and not cross against a light, nor get separated. The TL started to cross without enough time for the whole team to get across, so the team ended up split at the light. Big no no. Cadre actually started laughing at us. Not laughing with us, definitely laughing at us. We assembled at Independence Mall, and he gave us our penalty for getting split. We would play “Shark in the Water.” Basically, we were to march and any time the cadre could fit between people, they became casualties.

When someone becomes a casualty in a GORUCK, the rest of the team has to carry that person. We quickly acquired a few casualties and made halting progress from Independence Mall to the Philly Irish Memorial. I ended up carrying someone else’s ruck. Then, the TL was looking for someone to help with one of the casualties, and picked me out of the crowd. We moved for a bit, but I was carrying my ruck, someone else’s ruck, and my teammate’s legs over my shoulders and my shoulders were just smoked. I requested a swap out, and ended up swapping with the flag carrier. The flag carrier is always in the front and it is of critical importance that the flag not touch the ground because A) The American flag shouldn’t touch the ground because it is disrespectful, and B) Cadre will penalize the entire team with unspeakable torture if the flag touches the ground. It was windy as heck and I was struggling at times to keep that flag steady and high.

After cadre let us put the casualties down, I heard someone searching for their ruck, and I called out that I had it. Well, when some poor guy came to retrieve it from me, I kiiiinda cursed in his face because I couldn’t really figure out how the dickens to pass it back given that I was holding this ruck on the front of me and had this flag that couldn’t touch the ground on pain of death. Fortunately, the guy was a lot cooler than I was and simply offered to hold the flag so I could hand the ruck back. Genius, I tell ya. Pure genius. Again, be willing to ask for help when you need it. It’s a lot easier than cursing at some guy. And guy, if you read this, I’m sorry and thank you for being so chill.

When we got to the Irish Memorial, cadre informed us our next challenge was to ruck back to the start point at Penn Treaty Park, but we had to get there in less than 50 minutes. I continued as the flag bearer, with another young lady carrying the second flag. The nice thing about being the flag bearer is that you set the pace. The bad thing about being the flag bearer is carrying the flag through whipping 20 MPH winds and having constant anxiety about dropping it. Anyway, we were periodically being told to slow down by some folks who were struggling a bit, then being told to pick it up by the team leads who were calculating distance and estimating the required pace. We thankfully beat our time hack to Penn Treaty. I dread to imagine what would have been in store had we not. At that point, we lined up in formation again, uncertain what to expect, but it was patch time. Cadre thanked us all and congratulated us all for a good event, and we each got our patch to commemorate completion, and headed on our way. My shoulders were toast for a good few days after that.

Lessons I learned: Bring warmer gloves if it is going to be cold. I run in light gloves because my hands get warm fast when running, but GORUCK goes from marching to standing around to mountain climbers back to marching, so your body temp fluctuates. I really needed warmer gloves. And the second lesson: Be willing to ask for help. But do it nicely without cursing at people.

Thanks to Kyle James and Junior Joseph from our shadow team for the pics!