I ran the Philly Love Run this past weekend and learned a few lessons along the way. TLDR: Gummy bears and high fives: good. Frozen toes: bad.

I signed up for the Love Run late in the game, and it was probably a bit of a foolish thing to do because I had already signed up for a GORUCK that I did a few weeks ago, and I have the Hot Chocolate Run next weekend, then more races after that. I usually don’t sign up for this many events, but after interviewing Jen Nichols and seeing all the other 856ers signing up for the Love Run, I had to hop on the bandwagon. Jen is a race ambassador for CGI Racing and managed to pull together a huge team of people from Run856. In fact, the team won the first place team award!

Race weekend, I planned to go on Saturday for packet pickup at the Philly Convention Center. I don’t usually spend a lot of time at race expos. I tend to get in and get my packet and get out, and this one was no exception, since I had my two kids with me. If I hadn’t been dragging them along, I may have shopped a bit because Love Run has some really nice gear. There were photo ops all around the expo and I managed to con my kids into posing at one of them. The volunteers were super helpful and took our photo so I didn’t have to try to selfie.

That night, I got home and laid out my clothes. I was struggling a bit with what to wear as the forecast called for rain, but temps in the upper 40s and I tend to run hot, often stripping my layers as I run.  I ended up settling on my short sleeve Run856 Love Run shirt from South Jersey Running Co and my Skirt Sports Cascade skirt (if you shop Skirt Sports, use the code 1NEWLOVE20 for 20% off of full price and sale items). I really debated on two shirts versus one, but knowing how hot I get, I opted for less. I was scheduled to ride the bus over with the Road Runners Club of Woodbury, which was fantastically convenient and much easier than riding PATCO or fighting for parking in the Philly Art Museum area. After laying out my clothes, I stayed up too late (of course) and then set my alarm for 4:30 am (ouch).

Clothes all set up before the run

I got up before the sun, dressed, stepped outside in NJ and felt confident about my clothing choice. I got on the bus, and we rode over to the city in relative quiet, everyone still sleepy and contemplative. When we arrived, left the bus and immediately collectively noted the difference in temp from NJ to the city. It was noticeably colder in the city. We had arrived quite early, and had some time to hang out at our group tent. I had hoped to catch up with my friends from SJOCR who were also running, but we missed each other in the craziness of port a pot lines and starting line corrals. While hanging around the Run856 tent, I noticed my toes starting to go numb. Interestingly, the rest of me, while cold, wasn’t that uncomfortable.

The Love Run had color coded start corrals based on an estimated time we submitted at registration. As the group started moving up, I began to worry a bit about how my race would go given the numbness in my toes, but felt I had to just to with it. We started out heading down the Ben Franklin Parkway away from the Art Museum, then made a little loop from JFK to Market Street. Running up Market, we headed straight towards City Hall, which always makes for a scenic view. I was still struggling a bit with feeling sluggish and cold, but right near mile 3, there was a police officer guarding one of the cross streets who was the most exuberantly joyful officer I’ve ever seen at a race. She was cheering us all on, and giving high fives to anyone she could reach, and that high five seemed to imbue some magical powers because right after that, it was as if my legs suddenly remembered how to run. The 2:45 pace team had passed me, but after that high five, I caught back up to them and didn’t see them again.

The course then takes Arch Street back to Ben Franklin and when we got back to the Art Museum, we headed out MLK. From there, it was out and back along MLK with a few little side jaunts. Just as I got towards the Art Museum, I heard the first, second and third place winners being announced across the finish line, and could see the other super fast people coming back. I don’t always love an out and back course, but it is cool sometimes to see those speedy runners heading in. We could see the lead women heading in to the finish, and an older guy running near me started counting them off as he saw them.

I kept cheering on any other 856ers I saw coming towards me and started really feeling my stride. Mentally, I usually think of a half marathon as two five milers followed by a 5k, and my middle 5 miles tends to be my best. There was a formidable looking hill up to the Strawberry Mansion Bridge, and as we approached, in my head, I was thinking “nononononononoooooooo” but I just kept pressing onward and didn’t walk at all. We crossed the bridge, then looped around past the Strawberry Mansion, which was kind of cool to see. I never actually realized there was a mansion that that section of Philly was named for.

After crossing the bridge again, we headed back up MLK a bit more before the turn around to bring it on home. Shortly after we crossed under the Strawberry Mansion Bridge, I fell in stride with a woman named Danielle who chatted with me on through the finish. Although I typically finish the last 5k a little slower than the middle part of my race, I ended up picking up the pace on the last 5k, and I credit the distraction of talking to Danielle. At mile 11, Lisa Ann from Run856 was out in a pink bunny outfit giving out eggs with gummy bears, and I snagged one from her. I’m usually a red gummy bear diva, but I didn’t even care that these were all yucky yellow and green — they were the best gummy bears I ever tasted! Danielle and I hung together up the last little hill, and crossed the finish line right in step.

Danielle and I at the finish line… 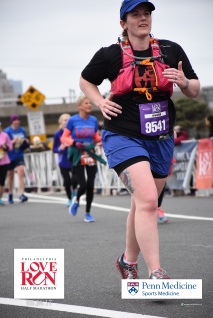 The best smile I could work up after 13.1 miles

I see the finish!

At the finish, they had the typical Philly soft pretzels, and there were Tastykake Krimpets in the snack bag. Sooooooo gooood! My finish time was 2:38:44. Not my best time, but not my worst either. One of my goals for this year was to break 2:30, and I wasn’t expecting this to be the race for that, but I was hoping to be a little faster than I was. Here’s hoping I can beat that time in Asbury Park in a few weeks.