Alicia is a mom of 4 girls (yeah, you read that right F-O-U-R), a runner, triathlete, on the board of directors of the Mullica Hill Women’s Tri Club, breast cancer survivor, and to add to that already quite impressive resume, she is now a published author.

Alicia entry into running happened as a kid running cross county. Alicia says she was “good in a small pond,” but then got into a more competitive group with older girls. She was 12 years old and now competing against harder runners. She says the pressure eventually led her to conclude that, “I hated running.” She went through spurts of trying different kinds of exercise, just to stay in shape.

Alicia’s girls are 9, 10, 12, and 22, and as they grew, she got involved in a book club with some other women in her hometown. The book club would move among their houses, and the women used it as an opportunity to socialize and drink wine. Lydia DelRosso was one of her book club friends and one night, Lydia pitched the idea of training for a triathlon. In her book, Women Who Tri: A Reluctant Athlete’s Journey Into the Heart of America’s Newest Obsession, Alicia describes how Lydia tried and tried to recruit her into triathlon, but she just had no desire to do it. 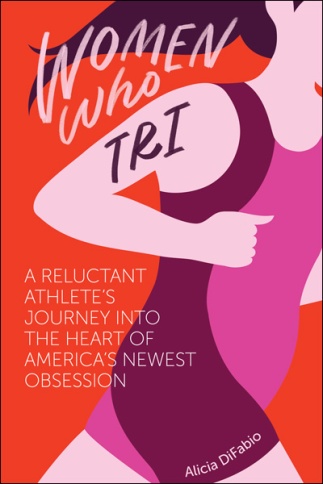 Women Who Tri by Alicia DiFabio

If you’re in South Jersey, odds are you’ve seen some Mullica Hill Women’s Tri Club gear around. MHWTC is the largest all women’s tri club in the country. Lydia went on to start the club together with Michelle Powell, Colleen Fossett, and Maureen Brigham. Alicia watched as “this tri club just sprouted up,” all the while resisting the call to join. “I just hated exercise,” she says. “These people are so crazy! Just, why?!?” Alicia said of her initial reaction to seeing the tri club blow up around her.

Alicia is a PsyD, and as such has an interest in research, and (obviously) psychology. She started to develop an intellectual curiosity about triathlon. Why were all these other women going so bananas over this? She decided the best way to find out would be to join in. She went back to running, and found that the shift from running for her dad, as she did when she was a kid, to running for herself was really liberating. In the course of her research, Alicia expected to find a “mold” or a specific type of person who does tris, but she was really surprised to find that all of the women she talked to had their own reasons and different personalities and approaches to training and racing. Alicia describes herself as being very “Type B”, and she expected tri people to be more Type A, but she found more diversity than she expected.

Alicia describes her self as a solid middle of the pack runner, but she wanted to do a triathlon. “The swimming, I suck at, and I’m scared shitless,” she says, but nevertheless, she got herself to the pool and got to work. Although pool laps “are insanely relaxing” and meditative for Alicia, she finds open water swimming in races to be more stressful. The bike is challenging for her and not her strong suit, but the swim is really the hardest. Open water can be daunting, and “that water is cold” and the sense vastness of the water around her is scary for Alicia. She worked her way up to racing in Queen of the Hill, a sprint tri hosted by the MHWTC. She says she was so nervous going in, but came out of the water and “felt invincible.” 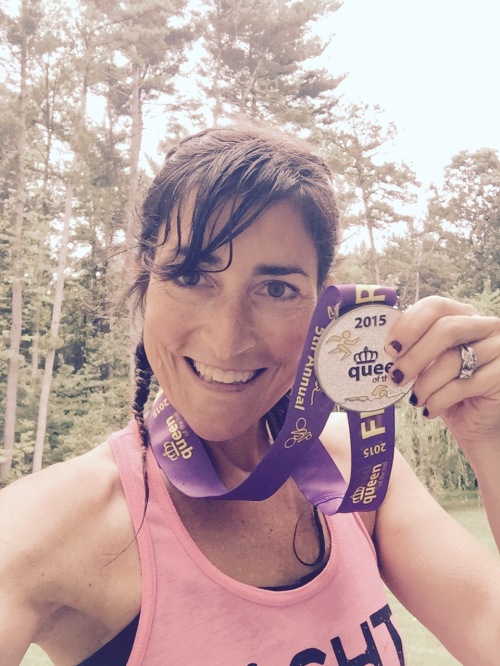 All smiles after the 2015 Queen of the Hill

Alicia’s favorite race, though, was the Broad Street Ten Miler. It was the longest run she’s done and she loved the Philly vibe of the race. She says she felt so proud of herself for conquering something that was really challenging for her.

Alicia juggled training mainly by doing very early morning workouts, or planning workouts when her girls were at school. She says guilt was a bigger barrier for her than time. “You just make time for the things you value,” she says, but she struggled to give herself permission to do something for herself for an hour. Alicia’s daughters have gotten athletic, too, and her nine-year-old is running 5k races. I asked if they ran together at all and Alicia cracked up, “She’s too fast for me! I can’t keep up with her!”

Alicia’s book weaves together her own personal experience with triathlon and the Mullica Hill Women’s Tri Club, triathlon history and profiles of inspiring women of triathlon. Alicia explained how she found the women she interviewed for her book, and says, “I stalked them down like a crazy person.” She says it is really out of character for her, because she tends to be kind of introverted. She looked for women who had inspirational stories but were kind of unknown, regular women just going out to do something amazing. She interviewed women across the county and shared their stories in profiles interspersed throughout the book. Full disclosure: I’m not done the book yet, but so far, I love the side by side profiles together with tri history and Alicia’s own journey into triathlon with “those girls in pink.”

To newcomers or skeptics, Alicia says, “You can do it. Anyone can do it.” She says she’s seen smokers, people with injuries, people who are overweight do triathlons. “It’s transformative.” When Alicia struggles during a race, she reminds herself, “I’ve done harder things than this.” (Such as defending a doctoral dissertation between rounds of nursing her infant daughter. Yeah, she’s done harder things.)

Alicia doesn’t tend to keep a packed race schedule, but she’s thinking of going out for the Philly Rock & Roll Half Marathon in September, so hopefully we can cheer her on then!